Well, my darling MANhandlers, I have to say I would make a much larger effort to catch Santa coming down the chimney if he looked like this. Enjoy!

My parents are awesome on an epic level. I love them with a ferocity that defies basic description. It’s always been this way, even when I passed through the dreaded Teenager of Doom years. They are, quite frankly, amazing. But, because they are human and subject to human flaws, there were a handful of serious Parenting Fail moments growing up. The one I want to touch on was the day they told me Santa didn’t exist. I’ll never forget the moment. I had recently defended Santa to a classmate who insisted Santa was his dad and was bothered the classmate, Ryan McSomething-or-Other, proved so insistent. Jackass, right? That first forkful of crow was hard to get down. Here’s how it went down.

My parents were wheeling a small BMX bike up the front walk and I followed behind. (I’d been at a neighbor’s house while they were shopping.)
Mom: “Don’t tell your brother about the bike. It’s from Santa.”
Me:

This didn’t bode well for the Easter Bunny, and I knew it with that crystal clarity inherent to life-altering moments.

I suppose I was a wee bit cynical that Christmas. Oh, I didn’t blow it for my brother with a casual, “Everything we’ve ever believed is a lie.” No, I let him have his excitement and his moment of wonder as I sat back and smoked a cigarette and sipped my scotch and contemplated the meaning of life. Not really. (C’mon. I was, like, eight. I didn’t like scotch yet.) In my mind, the moment was captured something like this:

“Don’t mind me. I’m just sitting over here living a lie, thanks.”

But this was the moment a tradition was born. My parents pulled me aside and told me that, as long I continued to believe in the beautiful mystery of Santa and maintained the Christmas spirit, the jolly red-suited big guy would continue to visit — ad nauseum. I chose right then to give up drinking and smoking and simply hold out hope the ‘rents were telling the truth. I remember easing back into the moment and feeling a little of the Christmas spirit revive in me.

It became a holiday tradition that my brother and I would sit down at the tree on Christmas Eve and shake our presents, trying to guess what we’d be opening come morning and then we’d lay a little wager about what Santa would bring. When he moved to Florida this year, at age 36, I realized I wouldn’t have that. I’m going to miss it. That doesn’t mean I’m giving up on Santa, though. Nope. No way. I’ve even got my husband believing. We hang stockings every year and, lo and behold, they’re filled every Christmas morning and there are special presents for us, whether it’s around our tree or Mom and Dad’s.

Santa and I have come to a gradual understanding over the years. It’s pretty much: I get fantastic presents in exchange for faith based on cookies, time and tradition.

I can live with that. 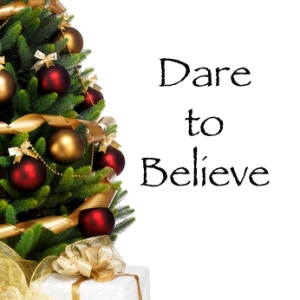